We are very pleased to have us with us Nikki Take. She’s the Interim Head of Growth at Mercer Wealth UK, and she’s also chairwoman of M62 Vincis, a sales effectiveness organisation.

In her words, Nikki spent 44 years pretending to be male and trying hard to fit into a role that didn’t feel comfortable with her. But for the past eight years, she’s found an identity that suits her perfectly. As she describes it, she’s finally wearing haute that fits. As a transgender woman, she has recently been shortlisted as an Inspirational Leader for the National Diversity Awards, the winner of which will be announced shortly. She has been listed in two of the Financial Times’ lists – including named in the top 100 outstanding global LGBT role models. Welcome, Nicci.

Q: Tell us about your experience of being a transgender woman in the financial sector. 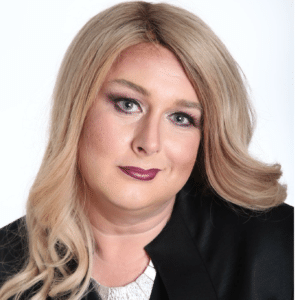 A: “When I came out, that’s an interesting story. I did have, at the time, almost 40, 45, 46 employees at Vincis, and I got blackmailed. So I had to come out. And when I came out and told everybody that I was trans, and they work for a tranny, I think they mistakenly thought I said “trainee”, because nine people left. And so the interesting thing is, when those nine people left, we were able to actually drive a change in the culture of the business. So in small business, you know, one of the things we have to do is recognise that some people just needed to leave in order for the organization to flourish and change and move.

That’s a really interesting point, because, you know, put that to big businesses. Okay, for us, it was nine out of 45, which is 20% of our population: if 20% of the population at Mercer, where we’ve got 2,500, if 500 people don’t want to change, that’s a much harder thing. They can’t all leave, can they? So we have to find a way of changing their views over time. So that’s one interesting observation, I think.

I do have to change the culture at Mercer. But it’s not about making it trans inclusive, it’s about making a change to their attitude and their culture towards selling in order to make them effective. The fact that they are all having to manage the fact that there is a trans woman making suggestions about what they need to do is interesting, and probably driving a more trans inclusive culture. But it’s more about changing the overall culture of the business.

And then the other thing that’s probably worth bringing out is I’m an advocate for women in business. Trans is sort of like we’re almost a rounding error: trans people are 0.3% of the population. That means for every one of me, we need to fill a room with 600 people.

“What’s really interesting is people’s reaction to us, to me, to trans women in particular, is a litmus test for what they actually think about women. So we’re all really comfortable when women turn up dressed as men, like, we actively encourage senior managers to dress in a way that we can take you seriously. So wear a pantsuit and put your hair up, don’t have your hair down. You’re looking very corporate, Elisabeth, you’ve got your white blouse on, and you put your hair up, and we’ve got, yes, minimal makeup, and I bet your nails are short. You are doing exactly what society says you should be if you want to be taken seriously in a business setting. And I’m doing completely the opposite. You know, long curly hair, long nails, usually flame red, more makeup than you probably wear on a night out. Today I’m in a frilly pink top and a micro black miniskirt. I’m everything that we would not coach women to do in the boardroom. And so the reason for that is we’re really comfortable when women look like men – it feels like they’re stepping into that authority position. People get really uncomfortable when a boy turns up dressed like a girl, because that’s like, ‘Why would you want to demean yourself?’ Which is what somebody has said to me more than once. ‘Why would you want to step down?’ Or ‘why would you step into a weaker, more vulnerable position where people aren’t going to take you seriously because the way you dress?’ Like, you’re the problem. And so I think the reason why organisations should be trans inclusive is got nothing to do with trans, it’s got everything to do with the fact that Mercer has me on their board, at the top, and that sends a message to all of the women in the business that it’s okay to be a woman, that this business actually doesn’t really care about gender. And that’s a much more important message, because it hits the 1000 women in the business, not the three of us who are trans.

My pet peeve every time I talk to women’s groups is that they say they have equity in the middle ranks, but we don’t have equity in the senior ranks. And they think it’s because the female leaders are not assertive enough. And so they ask me if I could put together some assertiveness training. And I have a counter narrative to that because they’ve seen the problem through the wrong end of the tube. The problem isn’t that our women are not assertive. The problem is that organisations overweight the need for assertiveness. If you look at the data, women are better managers. In 17 out of 19 categories, women are better managers. And the reason they’re better managers is because they’re less assertive, and they’re more collaborative. And so if we want to take our really successful, bright, smart women, and turn them into boys so that they can lead the business, what we’re going to do is lead our business of the end of the cliff. We have to change the organisation’s attitude towards what are fundamentally masculine characteristics that we don’t need anymore. And encourage us to hire and promote and nurture more feminine characteristics.

It doesn’t matter whether those feminine characteristics are in a cisgendered female, like you or transgendered female, like me, or beta males who are quite happy to not be the loudest voice in the room. The business imperative for being trans inclusive is not about trans people. It’s about women.”

Q: Finally, what does diversity and inclusion mean to you, Nicci?

A: “It’s not just about diversity. It’s now more about inclusivity. So often, now we’re sitting in meetings. We have a diverse team, and we’ve got men, we’ve got women, we’ve got straight people, we’ve got gay people, we’ve got white people, got Black people – we know now that we need to have diverse teams. So we bring people in and put them around the table. And then the leadership, who is often straight, white and male, walks into the room, tells everybody what they think needs to happen, ignore what everybody else needs to say. Then they walk out and think they’ve been inclusive. But the people who have been brought there for the token diversity don’t open their mouths or don’t speak because what’s the point?”

It’s a good point you’ve made there, Nicci. Inclusion is perhaps more important than diversity for some companies at the moment, isn’t it?